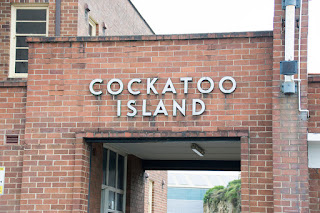 A stone’s throw from the waterfront mansions lining Sydney Harbour, Cockatoo Island — a UNESCO World Heritage Site — has a grim and varied history. It was a brutal colonial prison — like an Australian Alcatraz — between 1839 and 1869, where numerous prisoners died in custody and others died trying to flee. One famous story involves a guard being murdered by an inmate. The island became a colonial jail to take in the overflow of prisoners on Norfolk Island. After 1900 it became a crucial shipbuilding yard and naval dockyard, where conditions were better, but tough. Workers were killed in gruesome industrial accidents and at least one person mysteriously vanished. Tourists and even staff have reported various kinds of paranormal activity on the island, which draws ghost hunters from around the world. And while the grisly stories — and alleged ghosts — from the prison and dockyard eras are frightful stuff, they don’t seem to leave visitors as unsettled as those from a third bleak chapter in Cockatoo Island’s past: when it was home to a brutal reformatory school for little girls, some of whom are said to have never left. There have been many different hauntings noted over the years including dark shapes, intelligent hauntings (such as interactions with an entity), residual hauntings (when activity from a traumatic event is “trapped” and replays on a loop), electronic malfunctions and you may even get to see other people’s ghostly photographs from their visit to the Island. One chilling story about a poltergeist haunting involved a worker being violently pushed out of a room by an unseen force in Biloela House, the old superintendent’s residence. Next time you visit take a look at a certain upper-storey window where the face of the building’s unfortunate former resident sometimes appeared. Inside that building, previous visitors had smelled unexplained wafts of tobacco smoke and heard footsteps on the empty staircase. An especially creepy part of the island is the convict quarters, where conditions during colonial days were barbaric. A trio of punishment cells — narrow chambers carved into solid rock and used for solitary confinement — spoke to the brutality of the time, not least because they had been located, cruelly, beneath the aromatic convict cookhouse. These were the same cells used to punish little girls after the convict prison closed and almost seamlessly transitioned into the Biloela Reformatory and Industrial School for Girls in 1871. The girls were locked up in dormitories and often forced to sleep on the cold hard floor with no bedding. They were refused cutlery and forced to drink water from a common trough. Girls who acted up were locked in the confinement cells for hours on end. The girls on Cockatoo Island lived in squalid conditions, were prepared only for domestic servitude, and often subjected to cruelty and violence, including being beaten and dragged by the hair. When English social reformers Florence and Rosamond Hill visited Sydney in 1874 they were appalled by the vastly different conditions between the two schools. “Cockatoo Island was chosen as the new location (for the girl’s institution) but this site was really no better than the old one,” they wrote. “The building allotted to the school had obtained a terrible notoriety as a convict gaol. The home influences essential to the wholesome training of girls, the very lack of which had brought them to the school, are impossible of attainment within the gloomy walls of a prison.” A subsequent commission into the Biloela school uncovered such cruelty and mismanagement it was shut down in 1880. The girls were locked up much the same as the colonial prisoners before them. The traumatic experiences of the girls who once lived there are said to be behind many of Cockatoo Island’s most unsettling, sometimes upsetting, paranormal experiences. Visitors have reported seeing girls in white dresses near Biloela House and sounds of sobbing and a strong sense of sadness in the former dormitories.