May 05, 2020
How would you be seeing ghostly vision whilst walking through a cemetery late at night?

Would you be sacred and run for your life?

This story comes to us all the way back in time from 1891 in Liverpool - NSW. 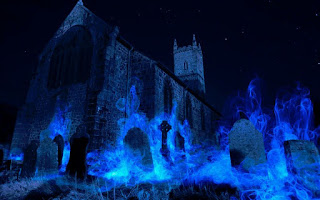 GHOST STORY UP TO DATE.

Having been concerned in a most remarkable and altogether inexplicable adventure the other evening, which happened to me in Thomas Lane, Knotty Ash, I have been induced at the earnest solicitation of many friends, to communicate the following particulars of the same to the Liverpool public as being of more than ordinary interest.'

So writes a correspondent of the Liverpool Post : — '
''I was proceeding leisurely on foot to Broadgreen (he proceeds), when, on passing the church at Knotty Ash, my attention was suddenly arrested by the strange and uncanny appearance of its graveyards.

The time would then be shortly after midnight. The whole burying-ground seemed alive and glistening with a thousand small blueish lights, which appeared to creep in and out of the different graves, as if the departed spirits were taking a midnight ramble.

I stood petrified, not knowing what to make of it, at the same time experiencing a feeling of horror which suddenly took complete possession of me.

Just at this moment the moon, which had hitherto been more or less obscured by a moving panorama of passing clouds, came, as it would seem, to my assistance, giving me for a very short time the benefit of her companionship.

And now appeared the most startling phenomenon of all, a phenomenon which caused my hair to stand on end with fright, a cold numbness of horror, paralysing me in every limb — for advancing up the road, directly opposite to me, came a funeral, train, the coffin borne along with measured tread, covered with an immense black pall, which fluttered up in the midnight wind.

" At first I thought I must surely be dreaming, and therefore pinched myself in the arm to ascertain if this were really the case.

But no, I certainly was not, for I distinctly felt the nip, and was therefore satisfied as to my wakefulness.

'What could it all mean ?' I asked myself as the cortege gradually approached me, and I began to distinguish the general outlines of the bearers. These appeared to be elderly men, and to have lived in a bygone costume of the latter part of the eighteenth century.

They wore tie wigs, and some had swords, as well as walking sticks mounted with deaths' heads. I observed only one really young man among the crowd of followers, walking just behind the coffin. His youth, in comparison with the others, perhaps made me take especial notice of him.

He was dressed in what appeared to be black velvet, the whiteness of bis ruffles standing out in marked contrast to the sombre nature of his general attire. He carried a sword, had diamond buckles in his shoes, and wore his powdered hair in a queue. The face of this young man was deathly pale, as were also the faces of all the others accompanying him.

Instead of the procession advancing to the gate at which I stood, it turned suddenly and entered the burial ground by the one situated at a few yards distance.

As the coffin was borne through this gate, all the blue spirited lights seemed to rise from the graves as if to meet the cortege for the purpose of escorting the body to its last resting-place.

These awful lights added considerably to the ghastliness of the scene as they floated  over the coffin and heads of the mourners. Slowly the procession glided up the pathway, passing the main entrance of the Church, and, continuing its ways in a straight line, finally disappeared at the back of the edifice.

Where this most extraordinary funeral went to or what became of it, I cannot tell ; but this much I distinctly aver, that coffin, mourners, and lights — even the pale flickering moonlight — all disappeared as mysteriously as they came, leaving me standing In the darkness, transfixed with astonishment and fright.

Upon gathering together my somewhat scattered senses, 1 took to my heels and never stopped running till I found myself safe in my own house. In fact, I scarcely remember how I got home. After recovering a little from the shock I immediately aroused a female relative who had retired for the night, and related to her the above particulars. She assured me that I must have been suffering from mental hallucinations, but, seeing the great perturbation of my mind, and at the same time knowing my natural scepticism with regard to all so-called supernatural phenomena, she came to the conclusion that, after all, I might possibly have seen what has been described above.

'The next day I made inquiries at the neighbourhood of Knotty Ash, and ascertained from a very old woman that she remembered a story in her youth having reference to the mysterious and sudden death of an old occupant of Thingwall Hall, who was hastily and quietly buried, she thought, at midnight, in old Knotty Ash churchyard.

If so, was this a ghastly repetition of the event got up for my special benefit, or was it a portent intended to foreshadow the coming of the Dread Visitor to myself?

Now, as 1 have before stated, I am no believer in ghosts, but certainly this very remarkable experience of mine has entirely upset all my previously conceived notions of this subject, leaving me in a quandary of doubt.

On the evening upon which I saw the mysterious midnight funeral at Knotty Ash, I was exceedingly wide awake ; had met several 'cyclists on the ' Prescott-road, with whom I conversed, and had likewise refreshed myself at the public drinking fountain placed at the top of Thomas-lane.

Strange that a few' hundred yards further down the road I should encounter so ghostly an experience — an experience I shall never forget to my dying day." — Newcastle Morning Herald.

May 16, 2020
Have you been to the most haunted house in Australia? I was there over 5 years ago when Reg the owner was still on this side of the veil.  Now, I am totally sure he makes himself known as one of the ghosts that haunts the historic site. Monte Christo can be found at Junee, NSW. The homestead is now being run to Reg's wife and his son, Lawrence. Lawrence conducts the ghost tours and tells stories about growing up in the homestead and the very many spooky stories associated with the homesteads long history. As with all houses of this ilk, the stories are not always sweet and covered with love and light. Some, are a little more mysterious and dark. I am hoping to go back after the COVID lockdown is over. And if you decide to go, I suggest stopping at the township's cemetery and stop and pay your respects to the original owners, the Crawley family and ask permission to visit. They may treat you nicely if you do!!! This story below, comes from an article by NATIONAL
1 comment
Read more

April 12, 2020
I am a ghost hunter - a very, lonely, isolated, stuck at home, ghost hunter!! The Covid 19 ISOLATION, which has been in force for a few weeks now (seems much longer), means that I cannot go our physically looking for ghosts, but I can still look through my many collected ghost stories from the past. I want to share some of these with you. Some end up being ghostly sightings - and some end up being a wild goose chase! But, it seems whether it be right now or 100 years ago - we all LOVED A GHOST STORY!! Here is one from 1925, with a ghostly appearance at Wallsend, NSW, Australia. SOUTH COAST TIMES DECEMBER 1925 NEWCASTLE                                     Photo from the collection at the University of Newcastle An unoccupied house of five rooms in Hope Street, on the western outskirts of the town, is the centre of attraction just now, as the result of reports of an apparition within it's walls. It is alleged by several people that they have plainly seen the fi
Post a comment
Read more

January 08, 2018
Lemon Tree Passage  is a suburb of the Port Stephens local government area in the Hunter Region of New South Wales, Australia, located at the end of the Tilligerry Peninsula and surrounded by the waters of beautiful Port Stephens .  Ever since I can remember there have been a few urban legends about a stretch of highway named Lemon Tree Passage Road. The story begins when a motor bike rider and his pillion passenger died after colliding with a four wheel drive killing both. This seems to be the source of the ghostly lights and apparition. These sort of events don't stay quiet in small townships. Stories spread fast often not ending up like they started. Every so often this urban legend makes a comeback with a number to people tempting fate and poking the ghost rider.             A memorial to Dale Dickens on the Lemon Tree Passage Road / Pic: Robert Mckell Source:The Daily Telegraph The  Lemon Tree Passage ghost  first made headlines in 2010 after drivers cau
5 comments
Read more