May 09, 2020
The World News reported this story in February 1938 about two men who had a spooky encounter what literally turned one man's hair white from his frightening night visitor! 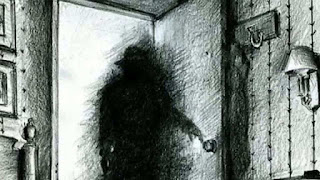 In 1900 my mate and I descended into the Hillgrove Gorge to prospect for gold.
This gorge is from 1500 to 2000 feet deep, and winds away for about 40 miles.
There are only certain spurs up or down which man or beast can travel.

It really is a terrible place.
We erected our tent on a small, green patch of flat and made ourselves as snug as possible. - There were no other prospectors in the gorge besides us.

Close to our tent was a dead ironbark log. Beside it we made our fire. We were both men of mature age and considerable mining experience, well used .to a. rough life in the bush, and not in any way superstitious. We never indulged in ghost yarns.

However, our first night in the gorge will never be erased from our memories. The fly pole of the tent was projecting about four feet beyond the. door of our tent, on which my mate hung his coat and hat. After yarning we turned in about 9 o'clock.

Our heads facing the door, the flap of which were fastened back.
It was a very dark night, but the ironbark was well alight and burning brightly.

Somewhere about midnight 1 was suddenly awakened by the sounds of groans and choking. As soon as my eyes opened I gazed on the most horrible spectacle it was my misfortune to behold.

Standing just outside the entrance I looked with horror, on a long, white face, and two glaring eyeballs of fire.

The face seemed to be looking through the waist of the coat. The hat appeared "to be perched well above the coat"

" The legs of the "ghost" were white and straight.

During this time my mate appeared to be in great agony.

In sheer desperation I let out a blood-freezing yell, dived under the back of the tent, and bounded away in record breaking speed.
My vision was blurred with fright, and I fell over a granite boulder and tore the skin from my limbs.

This encounter brought me to my senses. I there and then determined to return and render my mate all the assistance possible. I picked up two stones, and crept round to the front of the tent, only to see a white camp horse standing directly in front of the tent with the tails of my mate's coat behind his ears.

The coat was hanging on the ridge pole of the fly.
From where we were lying we could not see the hind legs of the horse.
The two glaring balls of fire were reflections of the blaze on the eyes of the animal.

My mate was paralysed with fear,
When the day broke clear, I saw my mate's hair had turned snow white. He said he thought it was the devil standing at the door.

After breakfast, he rolled up his swag and returned to the township.