I love finding gems of local history that are weird, strange, spooky and crazy. there is certainly more to the story of Newcastle than meets the eye.
This is the story of the BEACH HOTEL - not 'that BEACH HOTEL' at Merewether...there was another one.
Now all that remains of it is the story - an what a story it is!!! 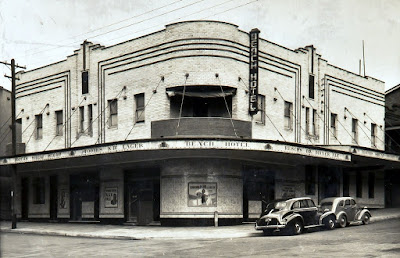 WEIGHING a hefty 46 stone, or just over 290 kilograms, “Jolly Nelly”, the cook at the Beach Hotel, was dubbed “The world’s fattest lady”.
Nelly was brought to Sydney from America to be part of Arthur Greenhalgh’s ‘freak show’ before the outbreak of World War II. She was one of several “sideshow freaks” put to work at Greenhalgh’s Newcastle pub during the war years.
When transport and lighting restrictions were introduced at the beginning of the war, Greenhalgh had difficulty placing his ‘freaks’ in employment. To house his ‘attractions’, including Irishman John Aussen, who towered 8 feet 6 inches tall (2.5m), and the ‘Human Skeleton’ Bill Banlaw, who weighed 66 pounds (30kg), and was 5 feet 11 inches (1.8m), he had them work in the Beach Hotel, which he had bought in 1942.
The Tooth and Company owned hotel, which sat on the south-east corner of Kings and Watt Streets, was leased to the sideshow promoter for over 30 years from 1942 to 1972 during which time he accommodated his ‘attractions’ recruited from around the world.
The “Giant Man” John Aussen washed the windows (without a ladder), ‘the pygmy’ tapped the barrels, and ‘the Fat Lady’ and ‘the Tattooed Lady’ shared kitchen duties.

The pub was managed by Arthur’s long-time friend and SP bookie, Albert George Anderson for almost the same amount of years.
Arthur was born to English parents, William and Daisy Greenhalgh, in 1896 at Southern Cross, Western Australia.
The family moved to Kalgoorlie, then to St Kilda, Melbourne, and eventually to Mackay, Queensland, where William ran a hotel-booth on the showgrounds. Billing himself as ‘Captain Greenhalgh’ or ‘Dead Shot Bill’, in 1909 he and his children started travelling as a sharp-shooting act in tented, sideshow alleys on the country-town circuit.
Arthur appeared solo at the Royal Easter Show in 1910 with ‘Volta, the Electric Marvel’ before his marriage to 19-year-old Esmée Georgina Burt in 1923. They remained childless and later separated. For many years Arthur lived with Fuchsia Lillian Lupton.
Arthur worked with rodeos and boxing troupes and became one of Australia’s leading sideshow entrepreneurs, presenting acts like ‘Tam Tam the Leopard Man’, ‘Dennis O’Duffy, the Irish Giant’, and ‘Chang, the Pin-headed Chinaman’.

“BIG SHOTS” OF THE BIG TOP Jimmy Sharman, Arthur Greenhalgh and Dave Meekin, men who run the biggest sideshows on Australian and New Zealand show grounds. – Smith’s Weekly 30 December 1939
In 1934 Arthur began the first of his many overseas tours to recruit novelty acts for his tent shows. During the late 19th century and the early 20th century ‘freak shows’, as they were known, were at their height of popularity.
The exhibition of people with physical, mental or behavioural rarities was an accepted practice in western culture.  The attractiveness of freak shows led to showman like Arthur recruiting and taking their acts across the country to fairs, agricultural shows, circuses and vaudeville stages.
When transport and lighting restrictions were introduced at the beginning of the war, Arthur had difficulty placing his ‘freaks’ in employment. To house them temporarily, he bought the leasehold of the Beach Hotel at Newcastle in 1942.
At one stage the ‘fat lady’ was hotel chef. “And a very good one, too,” Arthur said in a 1945 interview with the Sydney Sun newspaper.
In the interview Arthur said the snake-charmer was house-keeper; the skeleton man did yard work, and a 28 inch high pygmy assisted with hotel and cellar work.
Tremendously strong, the pygmy had no problem shifting the large barrels of beer and could lift a weight of 56 pounds. He was accidentally drowned in a Newcastle creek.
Appointed a justice of the peace, Arthur was a notable identity in Newcastle, where he was a patron of community organisations, such as the Police-Citizens Boys’ Club and the surf lifesaving club. He was also owner of racehorses, was a member of the Australian Jockey Club, turf clubs in Sydney, Brisbane and Newcastle, and Tattersall’s clubs in Sydney and Newcastle. The publican visited Melbourne annually for the racing season, seeing 56 Melbourne Cups in succession up to 1970. He was also a keen lawn bowler.
Arthur was described as a short chubby man with a red-face and a voice of a sideshow spruiker. He usually wore a large, diamond tie-pin in his signature cravat.
After the war Arthur, from his Newcastle pub, resumed his tent shows, which travelled across the country. However, during the first decade of the twentieth century the popularity of the freak show was starting to dwindle. By the late 1940s they were losing their audience, with credible people turning their backs on the shows.
The Newcastle publican was a founder (1935) and president (1950) of the Showmen’s Guild of Australasia and often defended his shows and how well he treated his ‘freaks’.
Arthur died while host of the Beach Hotel at the age of 76 on 20 February 1972 in the Royal Newcastle Hospital.
Most of his estate was bequeathed to his long-time friend Bert Anderson, manager of his pub. Bert, who also managed freak shows, eventually took-over the license of the Beach Hotel after Arthur’s death.
The Beach Hotel ceased trading on June 3 1975, and was later demolished.
The license was transferred to Fanny’s Tavern at the corner of Argyle Street and Wharf Road Newcastle in 1980.
All photos and story come from https://timegents.com/2019/07/28/beach-hotels-freak-show/