Have you been to the most haunted house in Australia?
I was there over 5 years ago when Reg the owner was still on this side of the veil.


Now, I am totally sure he makes himself known as one of the ghosts that haunts the historic site.


Monte Christo can be found at Junee, NSW.
The homestead is now being run to Reg's wife and his son, Lawrence.


Lawrence conducts the ghost tours and tells stories about growing up in the homestead and the very many spooky stories associated with the homesteads long history.


As with all houses of this ilk, the stories are not always sweet and covered with love and light.


Some, are a little more mysterious and dark.
I am hoping to go back after the COVID lockdown is over.


And if you decide to go, I suggest stopping at the township's cemetery and stop and pay your respects to the original owners, the Crawley family and ask permission to visit.


They may treat you nicely if you do!!!


This story below, comes from an article by NATIONAL GEOGRAPHIC. 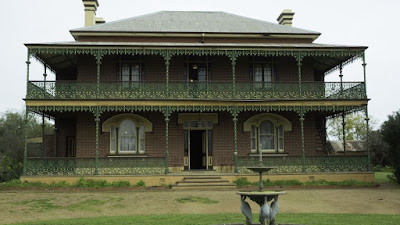 APPARITIONS, STRANGE orbs, poltergeists, and phantom noises are attributed to the tragic history of this isolated house on a hill overlooking the town of Junee. Built by farm owner Christopher Crawley in 1884, the house passed to his wife, Elizabeth Crawley, on his death in 1910.

Unable to get over her husband’s death, Elizabeth spent the rest of her life as a recluse. She converted the upstairs box room to a chapel and immersed herself in the Bible, allegedly leaving the house only twice before her death from a ruptured appendix. Mrs. Crawley’s ghost is said to haunt her former home — the sensation of ice-cold air falling like snow reportedly indicates her presence.
A chain of violent events in the house have triggered other supernatural incidents. A maid once plummeted to her death from the upstairs balcony, and the figure of a woman in period dress has been seen walking along the veranda to the blood-stained steps where she fell.
A stable boy who burned to death in his bed at the hands of his master is thought to haunt the coach house, while the ghost of a mentally disabled man named Harold wanders the grounds.
Kept chained in the caretaker’s cottage for 40 years, Harold was found curled up at the feet of his mother’s dead body. He died shortly after being sent to a home for the insane.
The sound of clanking chains is said to warn of his approach.
++++++++++++++++++++++++++++++++++++++++++++++++++++++
Sounds spooky?
It certainly is - and you can stay overnight too.
When I was there I stayed in one of the rooms allocated for guests. During the night I could hear people moving in and out of the room continually and I could hear the shuffling and clickety clack of shoes on the timber floor.
When I woke in the morning I asked my room buddies why they were so loud during the night as it was hard to sleep. They said that they had been outside all night only coming in at dawn to catch a hour of sleep before breakfast.
Then going downstairs I retold the story to Reg, who told me to go upstairs and check out the floor of the room I had slept in.
I did  - and found the floor to be carpeted.
I could not have heard shoes on that floor.
Yep - I'll be back!!